As a gift for a niece, I have developed this worksheet which should make it a bit more fun to learn the very basics of Binary.

I’m starting a new repository on GitHub which will be an svg based set of scientific icons. 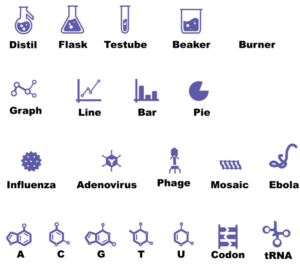 This is just the start of making some free to use (CC-BY-SA 4.0), science based icons that will be compiled into a web font (ttf, oeff, svg etc) and provide a css file to easy drop in placement into many websites in the science fields.

A lot of the icons are meant as inaccurate depictions. The goal is to convey the general idea behind the button or status without having to have every proton in the right place.

If you’d like to help, there are instructions on the github page for contributions.

I’ve been doing a bit of art for a local band, The Army of Broken Toys. This is a card of one of the members who was pregnant on stage, during their album release event.

From today’s Q&A with Jono Bacon. I need to use Jono to make a point, so apologies in advance. At 53:00 in the video Jono says is spending 14 hours a day working on Ubuntu. This despite having a brand new baby boy and a awesome meat smoker to contend with.

I say this isn’t fair on Jono. There is no reason why someone should be giving 175%. 14 hours a day is 70 hours a week; That’s more than the 40 hour week enshrined in the European working time directive for office workers; more than the 48 hour maximum safe working week for junior doctors; even more than the 60 hours a week that the Tory government want to change that to.

To put this into perspective, a balanced week would typically or ideally include 56 hours sleep, 40 hours work, 72 hours recreation, responsibility and relationships. But Jono does 70 hours, how can anyone be a good positive cheerleader with that sort of workload?

I think there is some blockage with the vast array of responsibilities that the Canonical Community Team have to do. A great deal of these responsibilities are likely only held by members of the team because we are unable to find volunteer or non-canonical business people to take them over.

I’ve had some really good chats in the past with Jono about the nature of the community team and how it’s often perceived as being the center of the universe for quite a lot of the Ubuntu community’s activities. There is a misconception that the “Canonical” community team is the authoritative organiser and sanctifier of activities. It’s not.

The Canonical community team are employed to look after Canonical’s interests in the community. So of _course_ they’re going to spend all their time focused on their business objectives, that’s what the team is for. Of course Canonical’s objectives might be over-stretching too, but I think the team also helps out in places for the good of the community which is leading to stress.

Our true centre, if we have one at all, is the Community Council. But it has never really taken on the responsibility of being a co-ordinating power. It deals with problems and that’s what it was made for. So I guess one waits for the project to explode before taking the charred remains to the Community Council for autopsy. This isn’t good enough.

What we need is a new centre of the Ubuntu Community universe. It’s no good having a company act as the sol centre of activity; volunteers hate working for free for mega-corp big bucks and move away over time as co-ordination is often innocuously prescribed along business objectives. A community needs a strong central point, or central set of core ideas that we can all dance to without fear we’re being abused by a large player using cheat codes.

“Ubuntu for everyone” used to be enough. A rallying cry from a thousand frustrated Linux users to come together, creating a gravity1 all of their own, pulling more people in until we had such a strong and healthy community.

That isn’t enough any more. We’ve been too successful. We have an awesome Linux desktop which we can install on anyone’s computer without very many problems. You can get it for free if you ignore the skull, download an iso good for a million installs of the same fully working operating system.

What we need is a new centre of the Ubuntu Community universe. A new point of gravity. A new co-ordination body who can sanction every hair brained scheme2, listen endlessly to every kid on irc who has an exciting new idea, comment on things, and act as a great mixing bowl for people and ideas. Such a body would need a reason and a goal, something resonant that goes beyond just technical aims, or marketing PR.

I seriously propose that we found an identity for Ubuntu which lies outside of Canonical. A gravitational body of such stability and neutral authority that the massive Jovian mass of Canonical will happily find it’s lagrange point while smaller congregations will find more comfortable points in their own orbits.

I hate to say it, but Catch 22, Canonical MUST be committed to such an idea. There is NO point in a bunch of community folk wandering off into the brush to build this. We would need everyone to recognise the problem we have here and help fix it with some radical rethinking about the community. And that includes helping Jono3.

Are you onboard? What do you think? Let me know below in the comments.

1 Gravity, the reason we all come together. Each Canonical PR blunder acting like stellar wind pushing more people away.
2 Every hair-brained scheme in Ubuntu is already sanctioned, but most of the time someone with a fancy hat and an official looking title just has to listen to it and say that it’s a good idea to give the kids confidence.
3 Save the Cheerleader, save the world.

Digital Aristotle: Thoughts on the Future of Education!

CGP Grey has a video linked above that you should go watch. It explains the future of education and the direction that it’s already moving.

What I’m interested in is how Free Software and especially Ubuntu can be a part of that educational story. Currently the Ubuntu desktop is targeted towards desktop use, office productivity and social networking. While it’s true Edubuntu takes care of much of the thin client school deployment strategy; that’s not what the above video is pointing to.

Is being a college student or adult learner better on Ubuntu? The wikipedia lens would seem to suggest that we do have better integration at least of online services. But do we have better software? There’s nothing smart, yet, about the desktop that allows it to focus educational material or read-more type links towards individuals. We even struggle delivering help and guidance about the software itself directly to users, instead requiring a web browser to do these things.

But perhaps I’m getting way ahead of myself. Ubuntu could just be a simple job of delivering a web browser, with smarter and smarter servers. But somehow, a lot of this software is going to have to be on the desktop. And at this point we get to decide if that means turning the browser into a desktop and depreciating all our existing desktop APIs or building enough web enabled desktop extensions to our APIs. I just don’t know.

For now, I’m going to consider if any of the projects I’m involved with will play a part in this grander human project and how best the designs can align with that great story.

What are your thoughts?

I decided to update my netboot image, make it a lot more awesome looking when it comes on. So I decided to use an existing awesome background (no credit found) and add the required parts.

First this is the default netboot splash for 12.10, it hasn’t changed in a long time:

Next, this was the original netboot image I made three years ago:

Finally, this is my updated image:

This is a great process work showing how MyPaint and Gimp are used to created great artwork.

Artwork by vonholdt on deviantArt:

Happy Father’s day to all you hackers with children. Keeping the two projects going is quite a challenge and I salute you all!

Here I am on my new door step (bought a house), relaxing with my lovely little Violet in the sun today.

Take a look at this video, here I show an awesome new technology for using Clutter/Gtk with Cascading Style Sheets.

You can test this out for yourself with Ubuntu 12.04 (Beta) using the following:

Note: default clutter/cogl has a bug which prevents the background’s opacity setting, so you won’t get as cool an effect. But a fixed version of those libraries should be available eventually.

Hello Community, I’ve put together a video to show my existing Ubuntu TV; the one I’ve been using with XBMC for the past year or more.

If you’re using a similar setup, I’d love to know how you manage your content library and do remote access. If you’re interested in my fall-over easy python modules for accessing the XBMC library database you can find the code on launchpad and the librarian code too.