I’ve been mulling over a new idea and I’ve come to my blog to draft my thoughts on it. I’m probably wrong, but I really want you to comment your thoughts below.

We have a Free Software world which is dominated by schools of thought, each focusing on a particular piece of the Free Software problem. Some of them know that they have a limited scope such as the Freedom Software Law Center and Software Freedom Conservancy (legal and sub-incorporation respectively) and then there are groups which try to be all things to all people like the grand daddy of them all, the Free Software Foundation.

I think the FSF itself wants to have a very limited scope, but it just can’t shake the fact that it’s political protests have implications outside of what it wants to do. Things like economics, interpersonal relationships, community culture and creative rights and remuneration to name a short few examples. I think perhaps that people who believe in the FSF’s political campaign, want it to be more. I know I’m frustrated with it’s lack of “do anything productive at all”, that seems to defined the last nine years. Many people who I know here in Boston voice similar low level grumblings think it’s lost focus a great deal because of what users want it to be.

Then there’s another organisation, the Canonical Ltd hype machine that is the Ubuntu community. It’s a pretty good force in the Free Software world (some people will disagree) but again, it’s members want it to be more than a corporate cheer-leading squad. They desire an authority that can standardise, set example, lead. But let’s be honest, Canonical can’t possibly do anything right in a lot of eyes outside of the Ubuntu community itself (even if it empirically did so). So the route to using the boundless capacity of enthusiasm and good ideas about community management and treating non-coders with respect has been watered down or rejected, ever tied to a company that is desperate to make money and over eager for your attention about it’s latest announcement that it drowns it’s own community out. 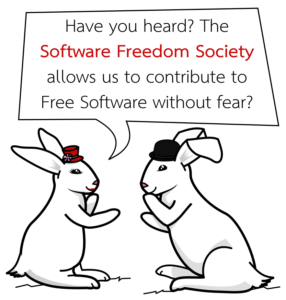 Now imagine a community that’s dedicated to Software Freedom like the FSF, as respectful and energetic as the Ubuntu Community, as transparent as Debian and as well defined as the Law Center. It’s goals would be to host an open membership, be an arena for debate about community structure, a place to document and explore social standards in both projects and the user communities surrounding them and to invite all to participate in projects as non-coding members.

We could take charge of the areas that the FSF struggles to host, help generalise existing community wisdom that might be tainted by the Canonical brand and provide valuable guides and education on the best ways to run projects and all the pieces needed to make them work.

We could do this by beating a drum and collecting together everyone until we get a critical mass that the social project works. But there is another more useful way too. Many coding projects suffer from a lack of infrastructure for their community operations, not just a lack of know-how. So we’d also start providing the-best-we-know-how pieces of community infrastructure such as mailing lists, forums, chat servers and social media mechanisms. The idea would be to share a lot of the technical burdens and let smaller projects have all the things they need to run a fun, inclusive and accessible community. 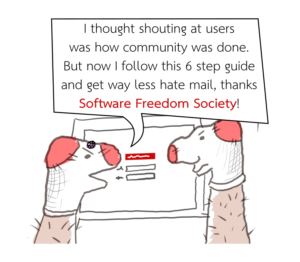 This project would of course ask other organisations to dismantle some of their existing structure. We’d have to gain trust and try and close down duplication as much as creating new spaces. This is after all about standardisation of social and community tools and practices and like the xkcd comic states, making new generic standards often leads to more standards. So making our infrastructure fast, pretty and reliable would also be important goals.

So, given that I’ve just rambled on about a passionate but off the top of my head idea (thanks for reading it!), what do you think? Please do comment below, comment in the social media link you might have used or you can email me at doctormo áŧ gmail.com with your thoughts. I really do want to hear from people as this idea could be important to the whole Free and Open Source Software universe.